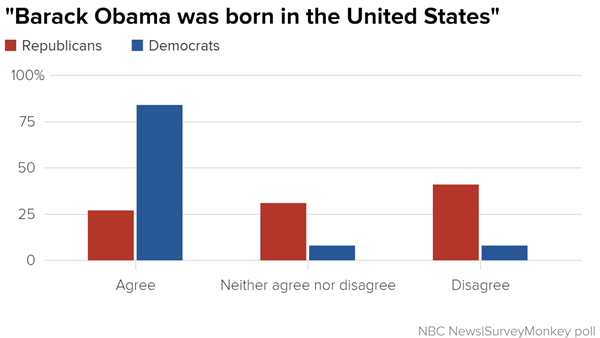 In August 2016 they polled people about the ‘birther’ issue.  The results are above.

What did that tell us?  That 45% of Republicans still believed the ‘birther’ lie 8 years after it was disproved.

There is simply no explanation for the ‘birther’ beliefs other than racism.  It is like a mathematical proof – if birther = looks black can’t be legit = racism.

And the administration took this racism to the White House – with the help of their Russian friends who fueled the ‘only white men should lead’ beliefs against Hillary and the ‘evil Clintons’.    And when Trump benignly read a statement that wink-wink said that Obama was born in America [and birtherism was Hillary’s fault], people stopped polling who believed what.  I speculate that a large % of Trump-no-matter-what supporters are also birthers – still.

Racism is based in an assertion that some races are better than others OR that the actions of a few legitimize hatred for the rest.

I reject both assertions.

So should anyone who claims to follow ANY of the major religions – all promote love, acceptance, tolerance and care for others regardless of who they are.

I don’t understand the ‘why’ of racism.

It seems to be a combination of fear and hate.  Maybe it is more than that.

If you can find one exception to the ‘all’, then it disproved the assertion of ‘all’.  It replaces assessments by look with assessments by actions.  I can live with holding people accountable for their actions and choices – but acting as if some are more worthy than others, nope.

I would love to understand the rationale for racism.  I just don’t.

Here is my hope –   We are observing the gradual demise of racism because racists are getting older and dying.  And new racists are not being produced as fast as the old ones are dying off.  And since racism must be taught [my belief], when the older racists die off, the teaching will stop.

I saw a documentary called “I am Belfast” and it featured the death of the last sectarian bigot.  I wondered if we could get to that spot – where the last bigot / racist dies and we are done with this.

Because being human is being part of the human race – a wonderfully diverse specie.  We come in many forms but inside we are all the same.  If we can learn to see past the exterior and acknowledge the humanity in each of us, we can move on to a better world for all.

For bithers, the real question is less why you would not accept the proof that was offered, but why you felt it mattered.  Same about claims he was ‘really’ a Muslim.  Why would it matter?

What if we could all confront our fears and learn to think and act differently?

I hope that The Resistance is really the change that rejects past beliefs built on hate and that underneath the frustration is a commitment to preserve and expand our freedoms so they finally are extended to all.

This blog reflects the musings of Joanne Rusch.